Lotta Gahrton Prod. (LGP) is a Swedish contemporary dance company working for young and adult audiences. We are a touring company that also often work collaboratively with music institutions, art galleries, schools and of course dance stages. LGP is partially based in the multi-ethnical suburb Tensta, outside Stockholm, which is reflected in many of our productions. LGP often investigates the role of the audience and works continuously with different levels of audience participation, both in the artistic processes and in the moment of the performance itself.

Malala – one of many (Age 10 and up)
A performance about Malala Yousafzai, the girl who risked her life for wanting to go to school. She was shot, but survived, and is now fighting for every child´s right to education. We also hear Swedish children´s thoughts about school, children that have the right, even mandatory by law, to 9 years of school – the very thing that Malala is fighting for. With music, dance and text the two worlds are intertwined. Freely interpreted by Anisur Rahman´s monologue ”Malala” (former ICORN writer in Uppsala)

Pilots of Silk (Age 3-9)
In a world of its own, Pilots of Silk, brings you music played live and dancers that are really, really close. The audience/children get to listen, look, feel and taste their way through the performance, following the longing life of the silkworm. After the performance there is a workshop where one gets to try the moves and sounds from the performance. And, of course, we sing our silkworm-song… the children are also welcomed to ask questions, and to try their own wings. More info here!

The Articles (Age 10 and up)
An interactive performance based on the human rights convention for children. Did you know that Sweden has received criticism by the U.N´s Committee on the Rights of the Child. In the process of creating this performance we listened to many young voices telling us about their different life situations. The result being a colorful, touching but also informative show about being young in the world today. What are we doing well and what do we need to do better?

Astrid – Life is not as rotten as it seems (Age 10 and up)
We were inspired by the Swedish author Astrid Lindgrens life and work and found ourselves in the middle of Swedish twentieth century history; Thoughts of human equality, the importance of children, taxes, urbanization, the consequences of war and the fight for our imagination. Much the same things as we struggle with today. Astrid was witty, fearless and provocative. But she also carried a lot of grief, loneliness and melancholy… This is our open interpretation of a Swedish icon and her work.

My mother is an import (Age 10 and up)
A performance about love, conflict and emancipation. About the cultural clash of growing up with parents from a different country than the one you live in – and on the other hand, how it is to raise your child in another country than the one you were born in? Most parent-children relationships goes trough the same struggles, maybe we´re not that different. To quote one of the interviewed daughters ”we are all human”.

Ragnar Kämpingebacken 3 (Ages 5-12)
Ragnar lives in Tensta. He always has. He is a lonely man who follows life through his window and dreams of the woman next door. He wants to celebrate something… or why not everything?

Mikael Strid hits the right note, smiling and gently touching as he moves between happiness and boredom, between movement and listlessness. Mikael Strids chubby, old man becomes memorable, even an ideal. Dagens Nyheter (The Daily News)

The piece was made in collaboration with children from the suburb Tensta outside Stockholm. The children, aged 8, came from many various cultures and they showed us dances and told us about their cultures and their daily lives in Sweden. They also participate on a film which is perceived as a window where we look out from Ragnars flat, sometimes the “window” also shows Ragnars inner thoughts or emphasize his feelings

Lotta Gahrton Prod. is, in different projects, supported by Swedish National Council of Cultural Affairs, The Art Grant Committee, The City of Stockholm and the County of Stockholm, among others. 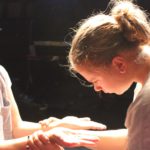 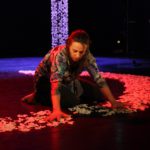 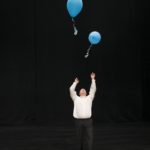 Astrid – Life is not as rotten as it seems 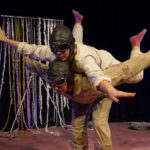 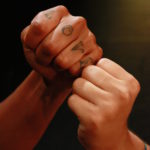 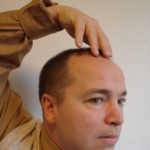